in jekyll, personal site
This post is a part of the “Adding Anything to Jekyll” series:

I want to share with you, how I’ve added a support for post series to my site.

Separating a big topic into several posts allows to deal with complexity. You don’t have to write everything in one go. And it’s easier to read as well because readers don’t get overwhelmed with the information.

I want to help readers to easier navigate post series. At the same time, the navigation should not distract from the content.

The source code for the post-series.html include is available in the site’s repository. Here’s the final result:

Here is how the design for a series posts list changed. 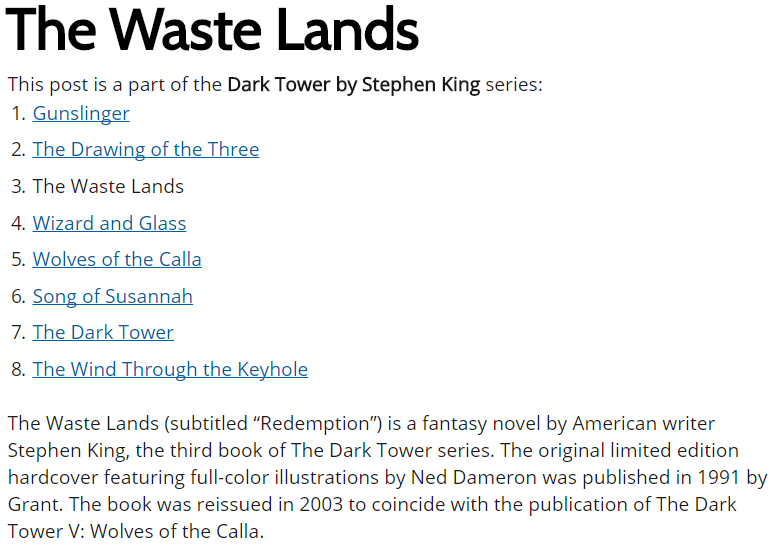 First thing, let’s make the font size for the list smaller to make it compact:

Now it looks better on mobiles, but on larger screens it still takes a lot of space.

So, the next step is to try and make it render horizontally:

Much better from a space perspective, but now numbers are gone, and the list looks messy.

To fix that, I’ll add numbers back and will increase the distance between the links:

Almost there. I want to separate posts’ links even more, so a list can be read faster. And I want to highlight the current post in the list, to make the navigation easier.

To separate links, I’ll add a middot separator, and I’ll highlight a current post with a color:

OK, now it looks as I want.

How It Is Implemented

To be listed in a series a post should have a variable series defined in its front matter block. The value of the variable is the name of the series:

All CSS styles for the list are defined in the post-series.scss file.

The include post-series.html is responsible for rendering a list of posts in a series. It’s added to the post.html layout, which got applied to every post on the site.

The post-series.html include checks for the series variable. If it’s defined for the current post, it gets all the posts with the same series name and renders a list.

That’s it. Now post series will be easier to navigate and read.